Ragusa: the city with a double soul

Ragusa is undoubtedly one of the capitals of Baroque. With its 18 monuments declared a UNESCO “World Heritage Site” in 2002, the city has a dual soul, consisting of the ancient village of Ibla and the Upper Ragusa district that combines Baroque textures grafted onto the medieval “forma piscis” urban layout with the more contemporary urban fabric. Among the valleys and alleys of Ibla are enshrined millennia of history and outstanding Baroque monuments, while the regular layout of streets in Upper Ragusa tells the story of the evolution of the city reborn after the terrible earthquake of 1693.

The present form of Ragusa is in fact the child of the 1693 earthquake that changed the history of the entire Val di Noto. The ancient settlement perched on the hill, where Ibla still stands today, expanded toward the Patro plateau, giving rise to Ragusa Superiore. Ibla is the neighborhood rebuilt by the Sangiorgiari, the nobles linked to the cult of St. George, who are credited with rebuilding a stupendous Baroque quarter with the wonderful Cathedral of St. George at its center. St. John’s supporters, the Sangiovannarians have given us a new city around St. John’s Cathedral. The rivalry between the two groups still echoes through the streets of the city, especially during the grand festivals dedicated to the saints.

Uniting the two souls of Ragusa is the Stairs district, which among hundreds of steps hides breathtaking views and monuments of great interest. Above all, the church of Santa Maria delle Scale, which partly preserves Gothic-Catalan architecture, and the nearby church of Itria with its blue dome. Along the route of the stairways, on ramps and small squares, one encounters extraordinary buildings such as the Old Chancery (once the seat of the Ragusa City Council, and Palazzo Cosentini from whose corbels one can admire the masks carved from local stone that peer down from above at passersby.

In the streets of Ragusa, faces of saints, muses, monsters, and animals “watch” with attentive eyes as visitors walk along the streets, courtyards and alleys of the Baroque land. 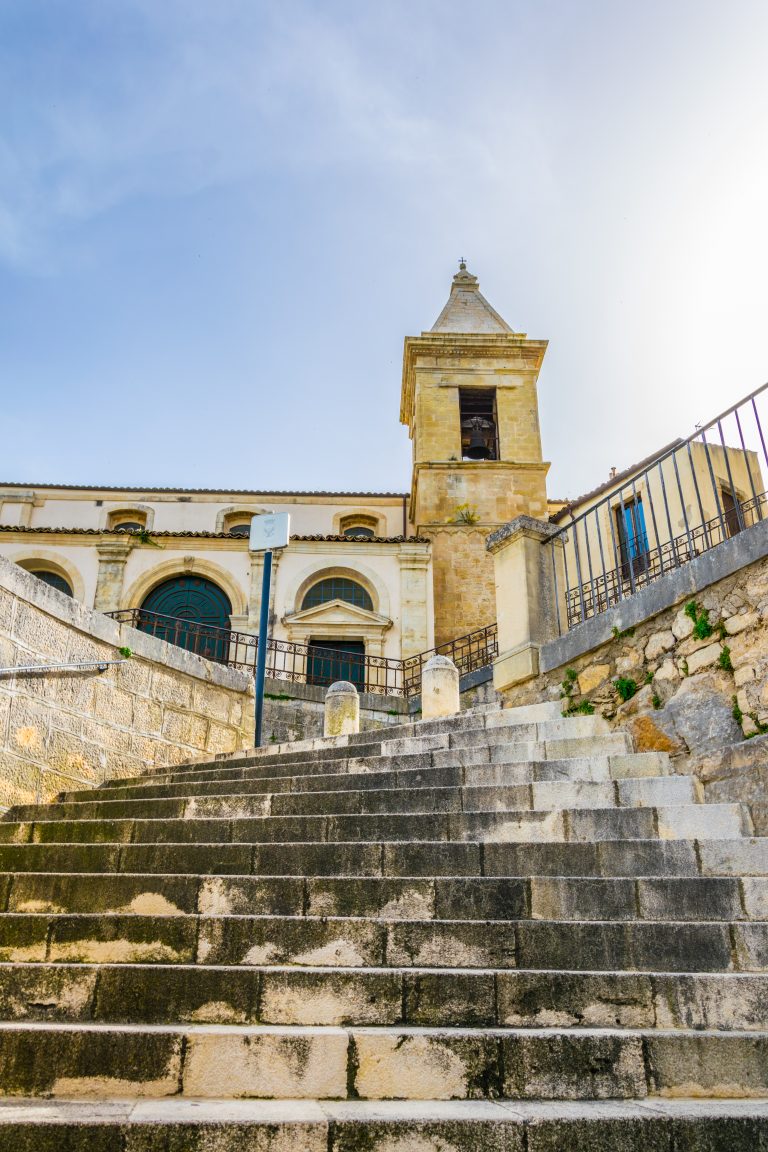 Ragusa exhibits an outstanding artistic and monumental heritage, interesting cultural events and nationwide events. Its ancient cults still preserve sacred and folk rituals such as the patronal festivals of St. George and St. John and the ancient rites of Holy Week. Stunning viewpoints provide views of the city surrounded by the Irminio Valley, the San Leonardo Valley and the Santa Domenica Valley.

Because of its extraordinary conformation, it has been chosen several times as a film set. As early as the 1960s, it was the set of Pietro Germi’s “Divorce Italian Style,” then the Taviani brothers’ “Kaos,” and in more recent years, Oscar winner Giuseppe Tornatore’s “The Star Man.” Several times its streets and squares have allowed Montalbano’s Vigata to be set. Walking around the city you will recognize numerous locations seen on TV and in the movies: in Piazza Duomo you will feel like you are in the square of Vigata and in Piazza Pola in front of what became the Vigata police station in some episodes of the series.

Ragusa is among the largest municipalities in Italy, in fact it manages to offer sea views and mountain nuances almost simultaneously.

To the northeast is the village of San Giacomo, a charming agricultural hamlet, a district particularly attractive for its terracing on the soft Hyblean hills that offers an agricultural and naturalistic environment, as well as the quality agricultural productions of the territory.

Surrounding it is the rural part characterized by the presence of endless plots of dry-stone walls that accompany man along endless walks among golden fields, carob trees and centuries-old olive trees, all accompanied by the sound of the bells of the Modicana cows that hide fearfully behind the dry-stone walls that perimeter the farms. A vast archaeological heritage enriches the entire municipal area. Prominent are the late antique hypogea of Trabacche, Cisternazzi and Celone; the archaeological park of Kamarina, the latter an important colony of Magna Graecia with its artifacts kept at the intent of the Hyblean archaeological museum. Of particular significance is the prehistoric under rock shelter site of Contrada Fontana Nuova.

Tourist Reception Center
Where to sleep
Where to eat

It is the oldest of Ragusa's parks. Among the garden paths you will find Mediterranean and exotic plants and can overlook the verdant panorama of the Irminio Valley. Inside you will find the churches of St. Vincent Ferrari, St. James and the Capuchins. 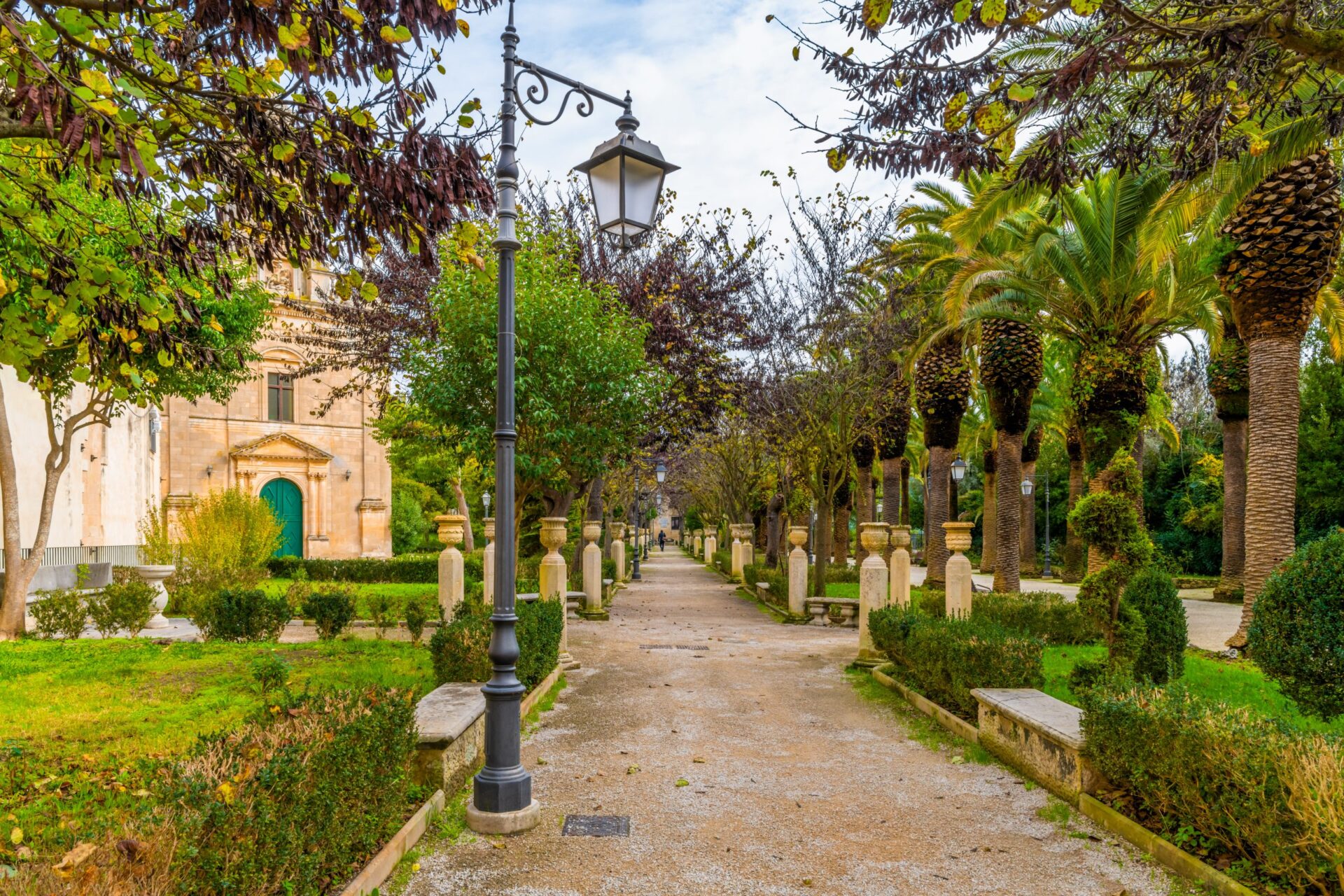 A few steps from the Hyblaean Garden endures the ancient portal of San Giorgio, one of the oldest vestiges of Ibla. 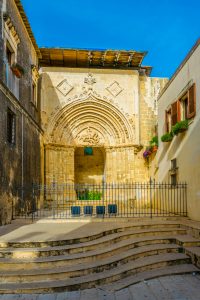 The portal dates from the mid-15th century and is one of the rare late Gothic evidences in the City.

The small Pola Square is overlooked by St. Joseph's Church and the Ibla municipal delegation building. 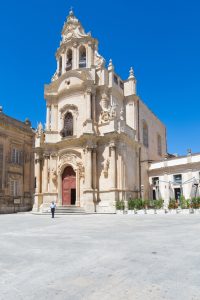 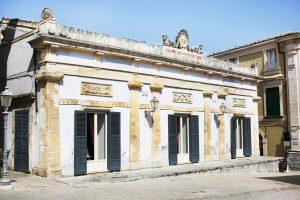 It is a symbol of Ragusa's noble past. The club, which began as a gathering of the city's nobles, has not lost its function and continues to be a meeting place for members. Inside there is a catlike atmosphere.

Look up, admire the curious Baroque masks looking down at you from the balconies. Monstrous faces, faces of nobles, musicians and angelic faces tell the story of the palace. The main floor was recently renovated and hosts exhibitions and events. 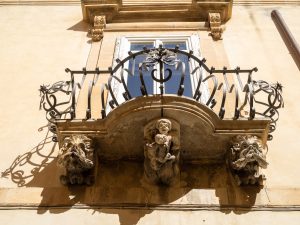 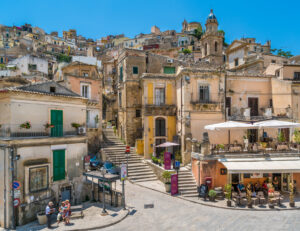 The square is overlooked by the Church of the Anime del Purgatorio and the Cosentini Palace. The church positioned on a beautiful flight of steps has a simple elevation where you will notice carved souls of purgatory enveloped in flames.

The palace is one of Sicily's Baroque masterpieces. The imposing elevation is striking in its magnificence and large balconies held up by grotesque corbels where you will notice reptiles, musicians, bare-breasted women and overflowing cornucopias symbolizing wealth and abundance 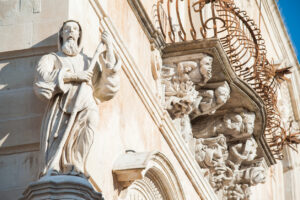 Church of the Itria 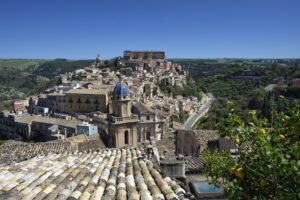 The blue dome of the bell tower of the Itria Church dominates the panorama of the Staircase district. Inside it holds altars with Baroque and Rococo decorations. The church is flanked by two important Baroque palaces: the Cosentini Palace and the Chancery Palace. The square is the heart of Ibla. We stand before a late Baroque theater, the space surrounded by elegant buildings is closed by the magnificent cathedral. The church dedicated to St. George is undoubtedly one of the late Baroque masterpieces of the Val di Noto. Inside among the many works of art, the wooden statue of St. George deserves a mention.

Along Corso XXV Aprile is the imposing palace that once belonged to the Baron of Donnafugata. The essential elegance of the elevation is a most interesting testament to Sicilian Neoclassicism. Inside it houses a small theater, the Donnafugata Theater. 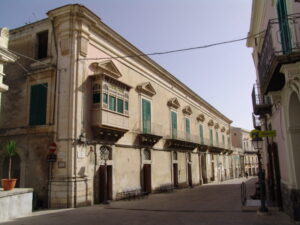 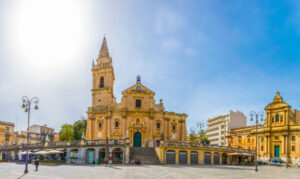 The square is the heart of the historic center of Upper Ragusa and houses the Church of St. John and the Church of the Abbey. The cathedral dedicated to St. John has a solemn appearance and shows hints of the Baroque in the Catania area. On the left rises a tall bell tower that does not find a counterpart on the right side. 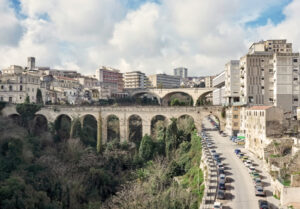 It is Ragusa's oldest bridge, built in the mid-nineteenth century it would allow the city to cross the Santa Domenica quarry and expand southward. The structure built entirely of stone dominates the view of the Santa Domenica valley and allows views of Ragusa's other two bridges: the New Bridge and the Pope John XXIII Bridge. 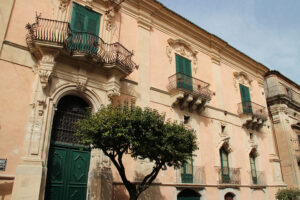 Among the main Baroque palaces of the new Ragusa we must mention the Zacco Palace and Bertini Palace. Rich elevations are embellished with masks that support balconies or conclude doors and windows 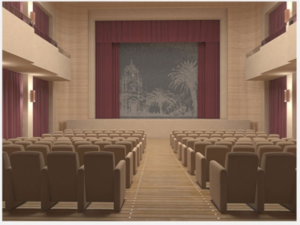 The theater was built in the mid-19th century. The interior has undergone numerous changes while the elevation responds to the original forms. You will recognize the busts of Vincenzo Bellini, in the center, with Vittorio Alfieri and Carlo Goldoni on either side of him. 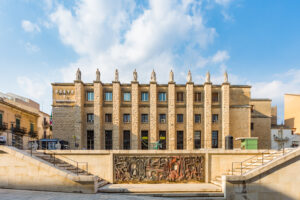 The building overlooks Matteotti Square where the City Hall and Bank of Italy building are also located. The rational lines of the elevation testify to the architecture of the 1930s in Ragusa, an important period for the city that was to become the provincial capital in those years. The nine columns of the elevation support nine statues made by sculptor Corrado Vigni.[/caption] 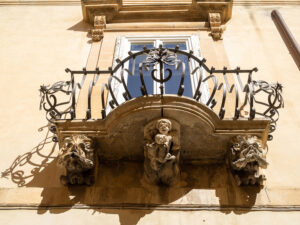 Look up, admire the curious Baroque masks looking down at you from the balconies. Monstrous faces, faces of nobles, musicians and angelic faces tell the story of the palace. The main floor was recently renovated and hosts exhibitions and events.

To the south, a few kilometers from the center, is Marina di Ragusa, a seaside hamlet beloved by Ragusans and tourists alike. The seaside village has been confirmed Blue Flag for years, is very welcoming, has large sandy beaches, a well-maintained waterfront full of services, and a well-equipped marina. Nestled in the Hyblaean countryside is the Castello di Donnafugata, a historic home of the Donnafugata family and now home to the costume museum. 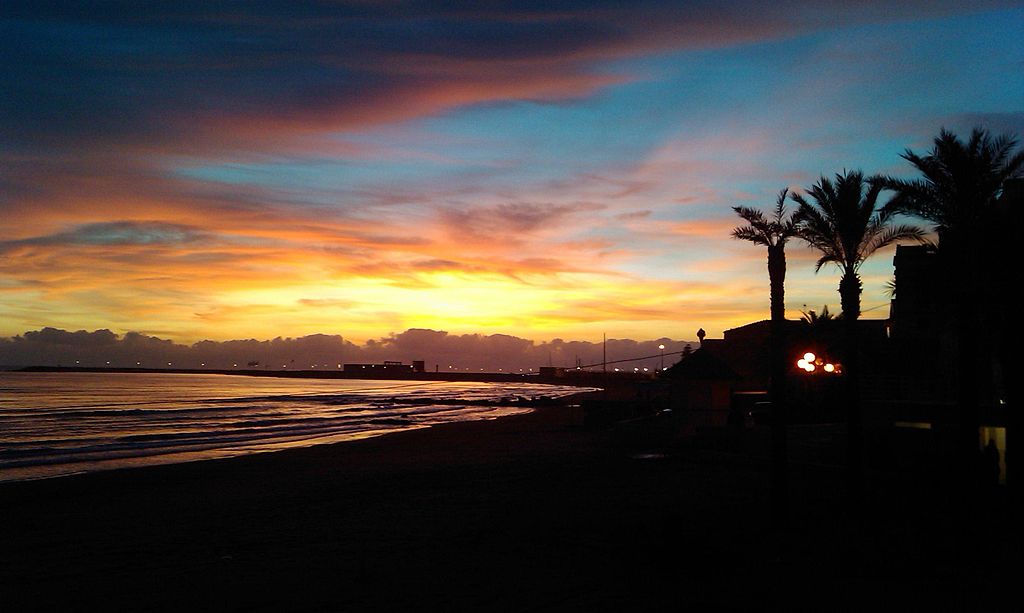 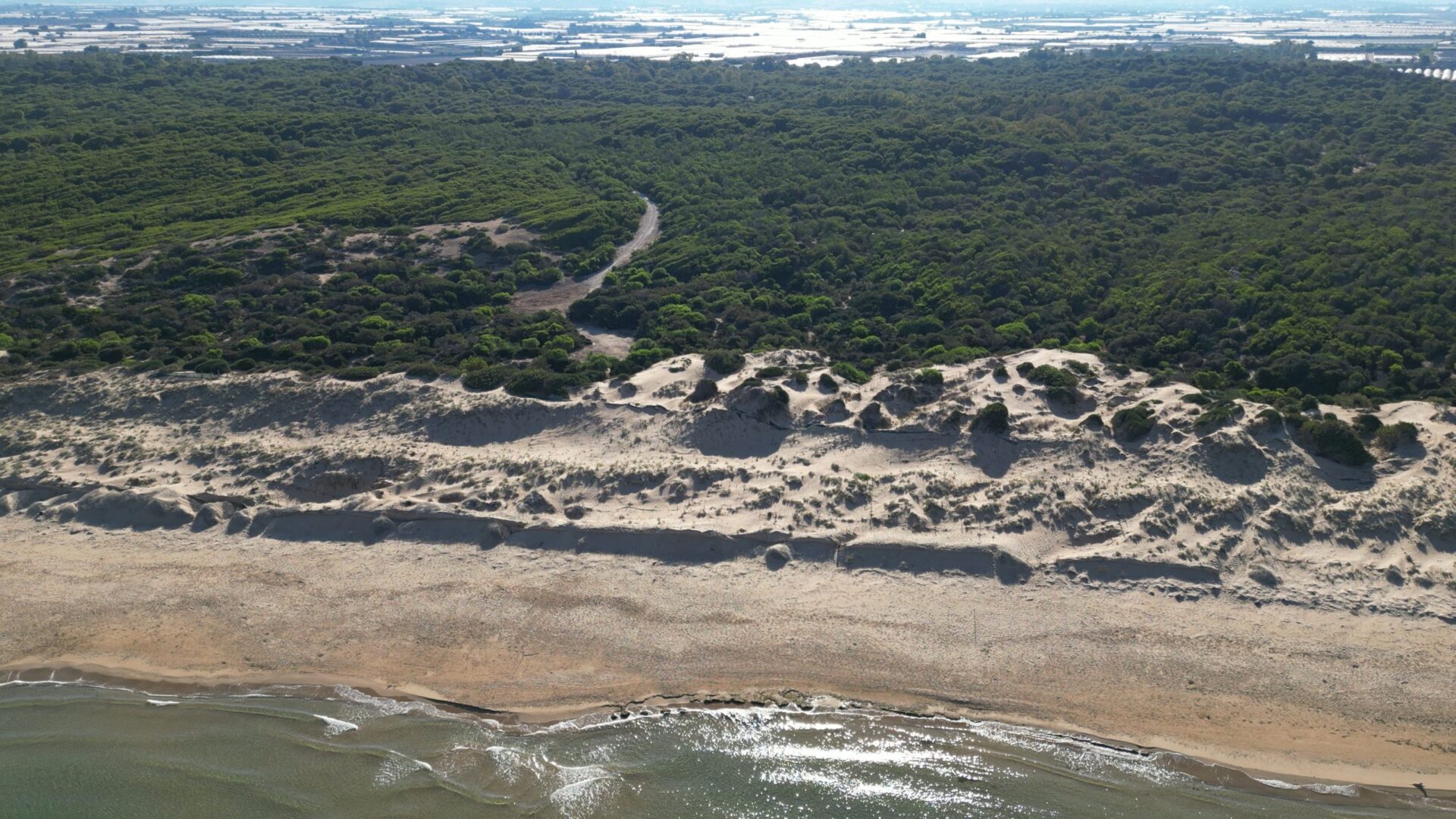 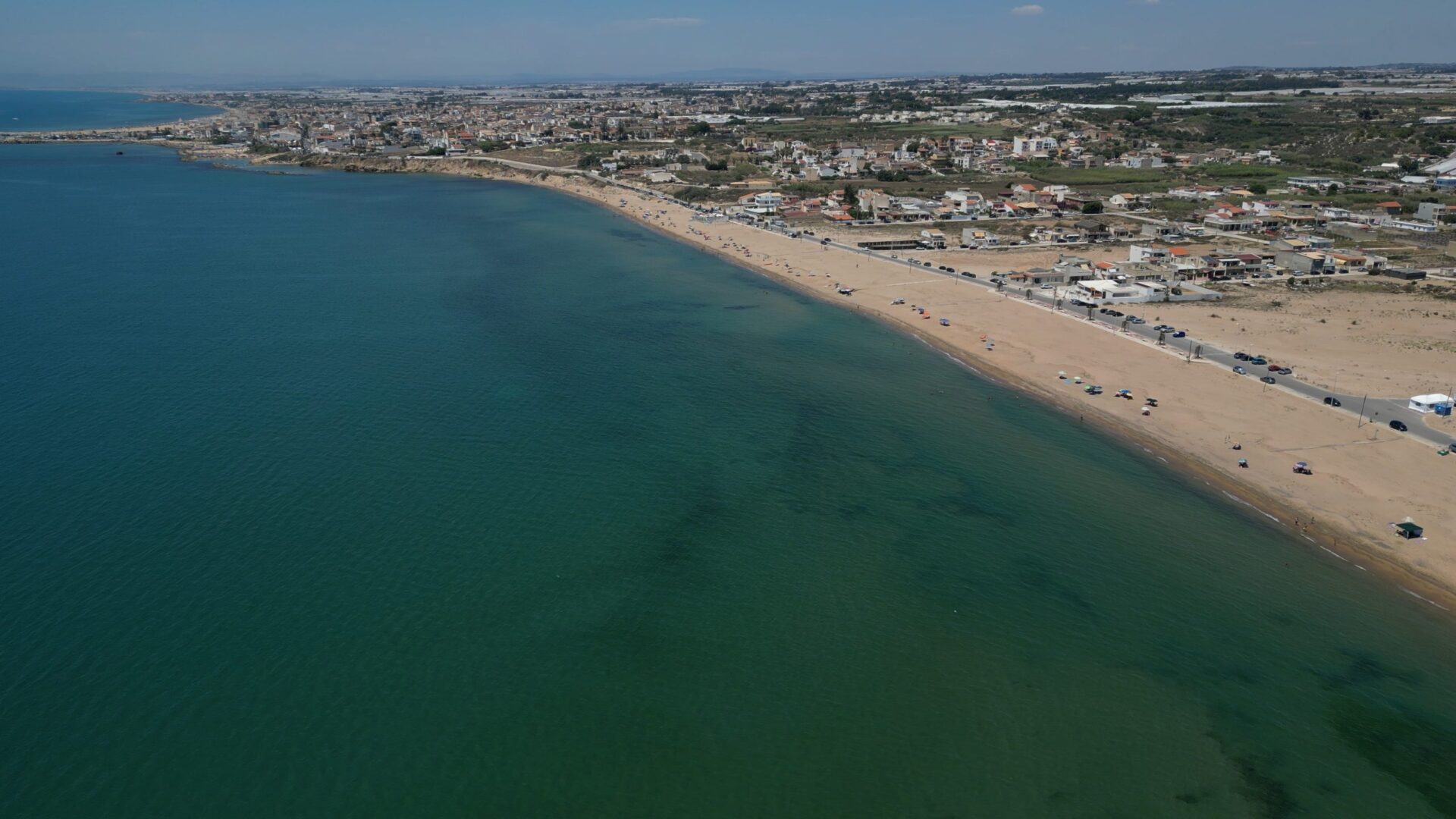 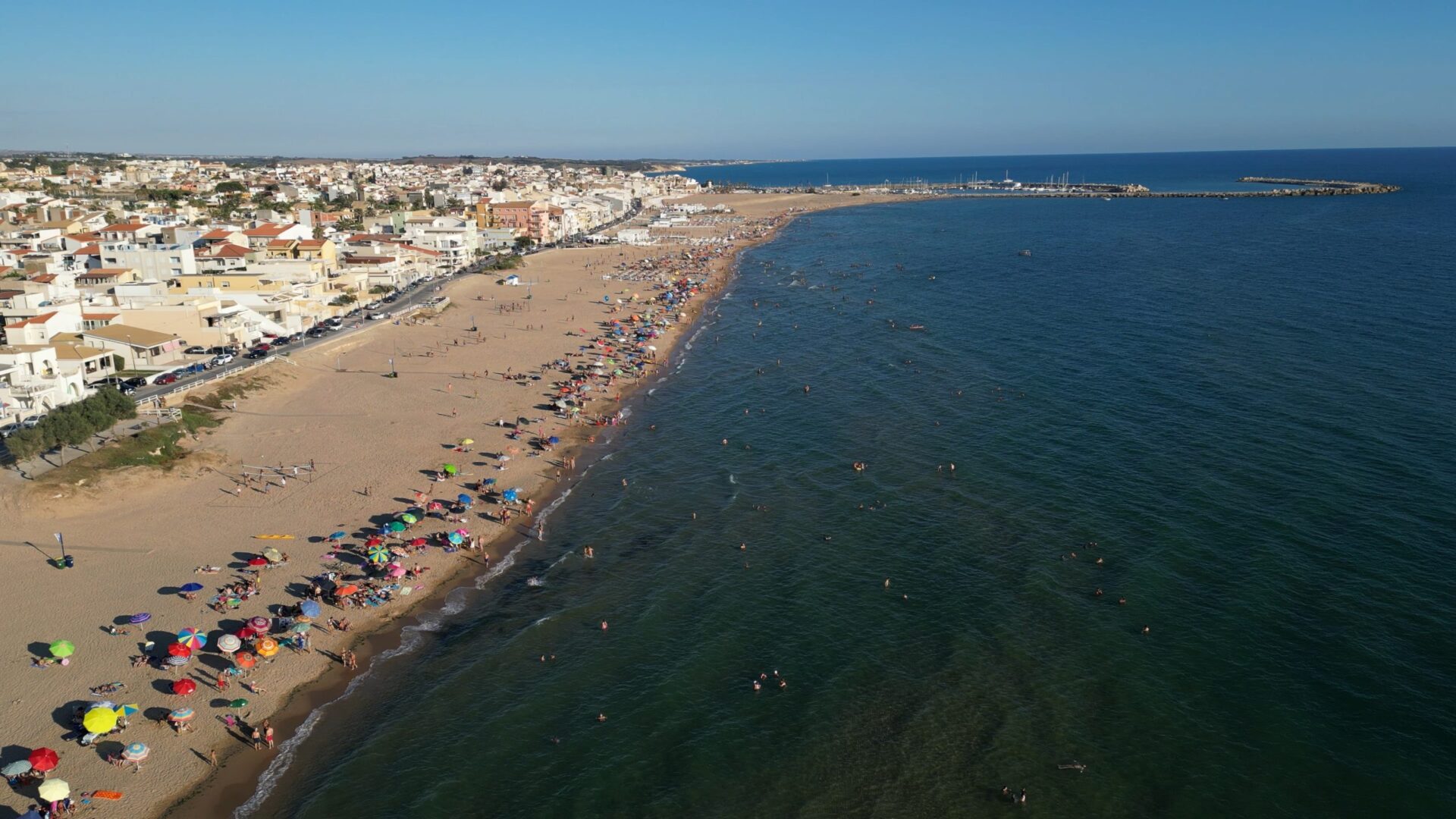